Voices of the LGBTQIA+ Community 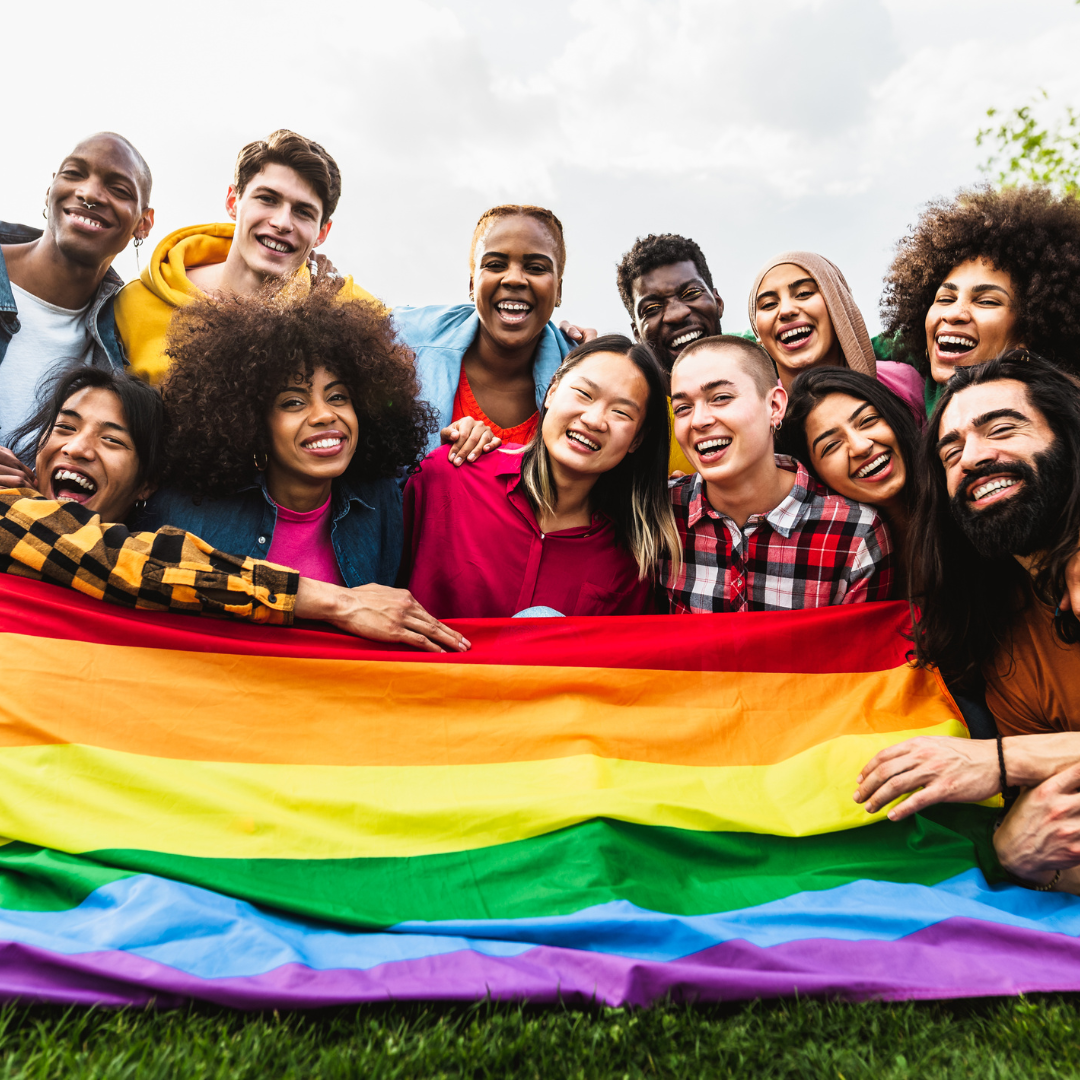 The TLC Foundation for BFRBs Young Adult Action Council met with a variety of community members from underserved populations that shared their experiences within our community to grow better understanding and celebrate diversity.

In this article, they talked with people from the LBGTQIA+ BFRB community about their experiences.

For many people living with a body-focused repetitive behavior (BFRB), the reality of secrecy is a familiar one. However, there is another group of people to whom this sentiment rings true, and that's the LGBTQIA community. These two demographics have more in common than it may seem at first. Both are far-reaching, covering a multitude of different identifiers and labels, with some that are more easily recognized by the general public than others. At the heart of it, people with BFRBs and the LGBTQIA community seek the same thing: inclusion, representation and a seat at the table.

Michael: I'm very excited that we are kicking off our series of diversity interviews with a community that many YAC members who contributed to this article identify with. While I am new to the BFRB community I came out as a gay man for the first time when I was thirteen years old. I'm very proud of my sexual orientation and the life I lead as a gay man.

Unfortunately, my journey with BFRBs was not as smooth. I began chewing my nails at the age of 5 or 6, but it wasn't until my mid-twenties that I started seeking therapy or being viewed as someone who could possibly have a BFRB. The TLC community is new to me, but I'm glad that I have found it. I'm excited to highlight LGBTQIA issues within the BFRB community because I think it is important.

I believe that the LGBTQIA community is our largest minority within the BFRB community and they are some of our most vocal members. When we hold diversity events at the conference, you look at all the minorities represented and while most tables have a modest gathering, the LGBTQIA table, you can't get a seat. It's standing room only.

Even so, we have next to no data about BFRBs within the LGBTQIA community, even though we know that members of the LGBTQIA community are diagnosed with mental health problems at a higher rate than the general population. This data could have huge implications for our understanding of what factors cause BFRBs.

Nico and Sophia, what are your thoughts and experiences about LGBTQIA issues among the BFRB community?

Sophia: I think my story is almost the opposite of Michael's. I've been a member of the BFRB community since I was nine, when I was diagnosed with trichotillomania after I started pulling out my eyebrows, eyelashes, and head hair.

My first conference a few years later changed everything for me. Finally seeing that I wasn't the only one struggling with this, along with having access to experienced mental health treatment providers my family found through the TLC Foundation, made a huge difference for my hair-pulling disorder. Towards the end of high school, I rejoined the community as a researcher and a student, with a goal of becoming a therapist, and I've been an enthusiastic member of the TLC Foundation ever since.

Conversely, I didn't realize I was bisexual until I was in my twenties, and I was definitely aware that the queer/LGBTQIA community existed. For me, I think there's a lot of overlap between these two marginalized experiences - both being queer and having a BFRB can involve a lot of shame and secrecy, and a fear of judgment from both loved one and outsiders.

Like Michael said, there's a dearth of research specifically looking at the interactions between queer identities and BFRBs. Part of that is on the researchers, who need to gear their research toward looking at this population, but one way to get that is for the community to be vocal about needing scientific attention. So far, the biggest feedback we've gotten from talking to TLC community members who identify as LGBTQIA is that there isn't much information available for them about their specific situations.

Nico: My BFRB journey started when I was diagnosed with trichotillomania around nine years old. Though I didn't attend my first TLC event until a year later, I made it my mission early on to educate myself and others on BFRBs. For me, my first conference was overwhelming in the best possible way. I never thought that I would meet so many other people who knew how it felt to pull out their hair and pick their skin. This first conference paved the way to many meaningful and life-long friendships. It also ignited a spark that would later become a full fledged, fiery passion for spreading BFRB awareness.

I have been an active member of the TLC Foundation since my first conference thirteen years ago, attending workshops as well as presenting. It was through these friendships and bonds I made and my involvement with TLC that enabled me to be more confident not only in my openness with BFRBs, but with my day-to-day life as well.

I came out as bisexual when I was 17, it was nerve wracking and scary, almost in the same way as admitting I pulled out my hair and picked at my skin. Just like coming out about my BFRBs, coming out about my sexuality became easier and easier the more I talked about it, the more I was willing to open up. When I finally came out as nonbinary, it didn't seem so scary anymore, in fact it was just another aspect of who I was.

I like to think of myself as someone who has BFRBs, who is nonbinary and bisexual, not someone who is defined by these things. They are a part of me, but they are not who I am, just as people who have BFRBs are not defined by their picking or pulling or nail biting, etc. As Sophia and Michael stated, the BFRB experience spreads across many different populations, yet there isn't enough research done on marginalized communities. Our hope is to shed light on the experience of LGBT individuals and highlight community specific concerns and situations.

Erin, Catie and Brooke agreed to discuss their experiences as individuals who identify within the LGBTQIA+ community and experience BFRBs. They have each been involved with the BFRB community for a few years, and have attended TLC Annual Conferences.

Tell us a bit about yourselves:

Catie : Some of the terms I identify with: queer lady with dermatillomania and trichotillomania.

Brooke* : I am gay and a skin picker and hair puller.

Can you speak to some of the unique obstacles your community faces in treating your BFRB?

Brooke: [The greatest obstacle is] probably the fear of going to therapists or doctors and not feeling like we can talk about everything that's actually bothering us. For example, a hair puller may go to a therapist but leave out important details about relationships because of the fear of being judged.

Erin: A sentiment I've heard expressed is that sufferers may feel like there are so many other issues affecting their families (poverty, illness, lack of opportunity, childcare, debt, etc) that their personal issue should not be not a big deal and they shouldn't focus on themselves because that is selfish.

I don't know anyone in my local LGBTQIA+ community who struggles with BFRBs. I feel the obstacles would be the same stigmas that other communities deal with; shame, isolation, fear of misunderstanding.

Catie: [One of the biggest obstacles is] lack of knowledgeable therapists (BFRBs and LGBTQIA issues). It is still scary as a lesbian in 2018 to find treatment providers that I am sure I feel comfortable talking openly with. Of course, trans folks are the most marginalized and at risk population, and as skin tone darkens so does opportunity and access I think.

Also, hair and physical identity/features are such an important part of my own display of my gender identity AND sexual orientation. There is such shame with both identities: person with BFRB and lesbian.

What are some of the hidden perks of having a BFRB? What are the ways you've embraced it?

Brooke: The best thing for me about having BFRBs is probably the community. I've made tons of friends and mentors and that's an awesome feeling. Also, I'd like to think that I could help someone by sharing my story one day.

Catie: I went hat free for a couple of years, though even having just had a gigantic pulling episode (several months) and had a very large bald spot. Also, I talk openly with my fourth and fifth grade students about having a BFRB.

Erin: I have actually been talking about [BFRBs] in the last year. Opening up has been scary, but usually the person I'm talking to ends up knowing someone who engages in BFRB behaviors or doing the behaviors themselves.

In what ways can TLC better support their LGBTQIA+ Community?

Brooke: BFRBs are so common, yet unknown. I think we could reach out to other LGBTQIA+ organizations such as The Human Rights campaign and other Non-Profits and educate them about their own BFRB community. We should start small, like in local Gay-Straight Alliances and other organizations.

Catie: Yes, why not!? What about PFLAG?

Erin: Yes, absolutely like that! Big Brothers / Big Sisters and other after school programs.

What is one thing you would like to share with us: the diversity council, TLC and the population at large?

Brooke: The biggest thing is probably just representation. The LGBTQIA+ group at the conference last year was a huge deal to me, and probably many more people. BFRBs often affect relationships, so that's important to talk about, but it can be even harder when it's not a heterosexual relationship.

Catie: Let's start by forming a visible presence in the BFRB community. We need to have an established group/session at the conference!

Erin: Just like with any mental illness, breaking down stigma and talking about it will make accessing treatment easier. I really enjoyed the brainstorming session we did during the LGBTQIA+ Focus group at my last conference about ways to support our community. We need to keep striving to make sure everyone has a safe place to be themselves without fear of judgment.

The way we present ourselves physically as LGBTQIA+ people and people with BFRBs is so personal but such an integral part of our identities.

The LGBTQIA+ community has a sad history with clinical psychology. As a previous diagnosis in the DSM, LGBTQIA+ people were "treated" and even institutionalized just because of the way they identified. To this day "conversion therapy" is still practiced across this country.

It can be very hard to seek treatment or know if you can trust a psychologist or therapist to talk openly with. It's interesting that in spite of this knowledge, the LGBTQIA community keeps coming back, and we see them at the conferences and we can quantify that they are a large portion of patients seeking treatment for mental health problems.

Some More Advice For Significant Others

Surviving Freshman Year and Beyond: What You Should Know about BFRBs and College